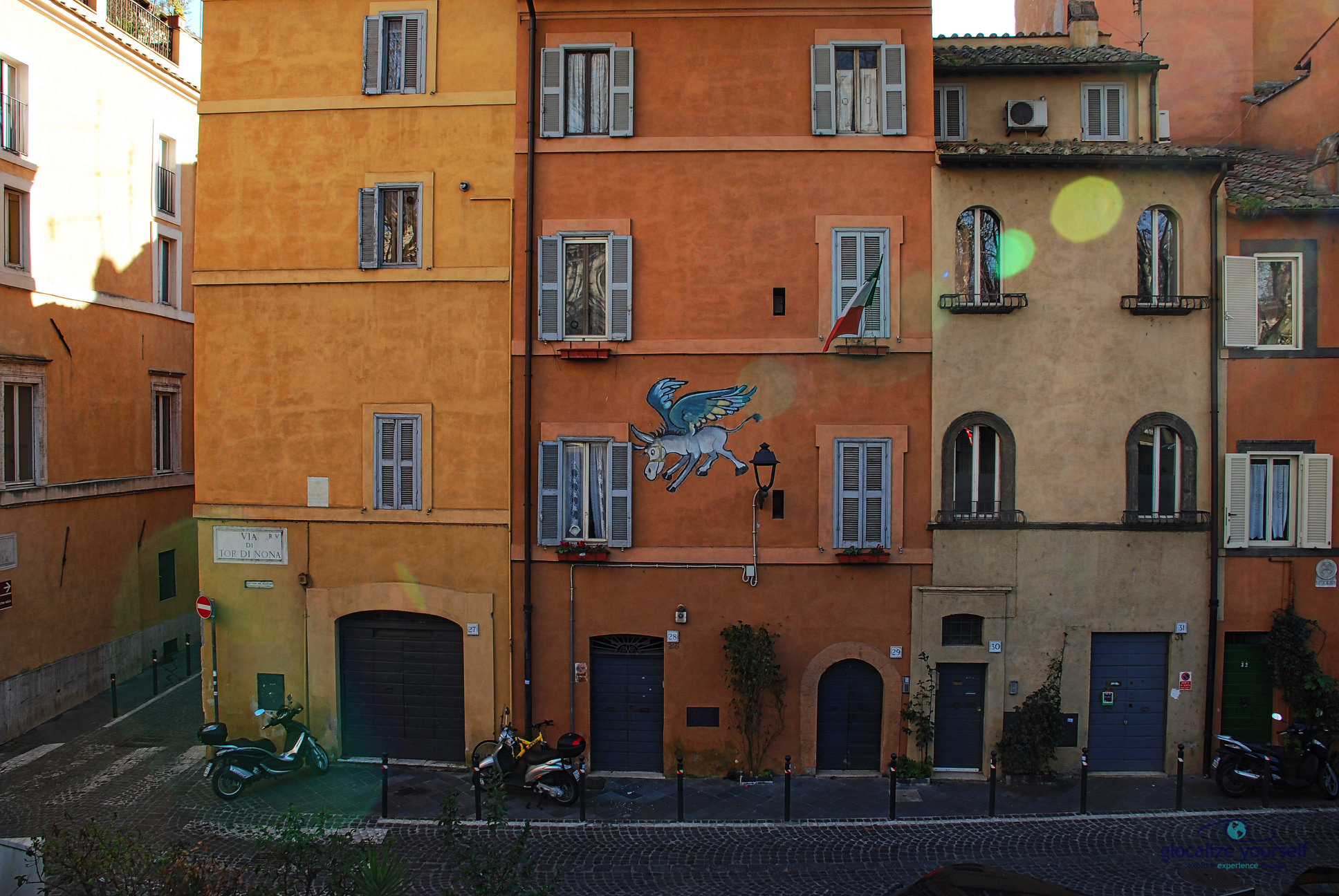 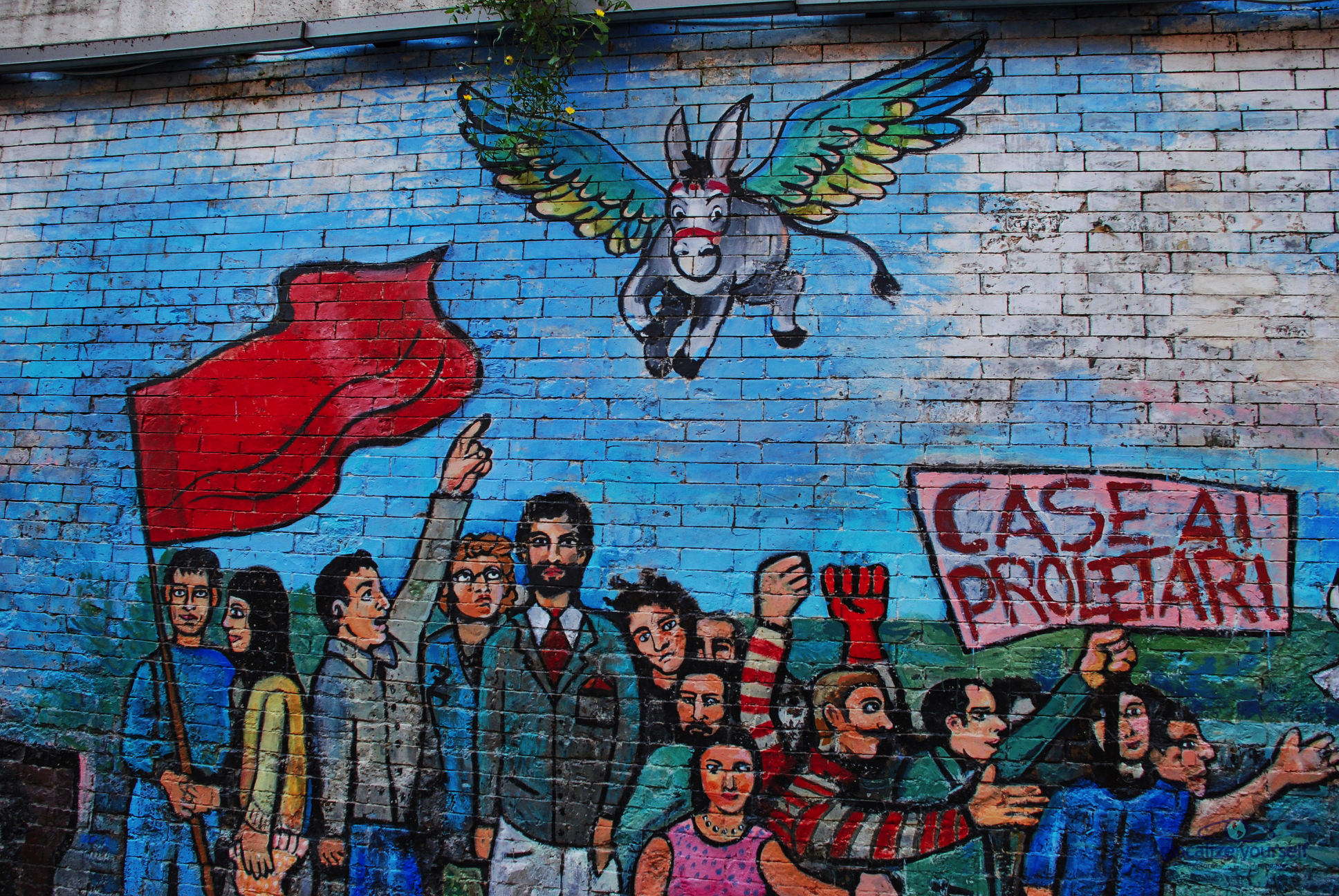 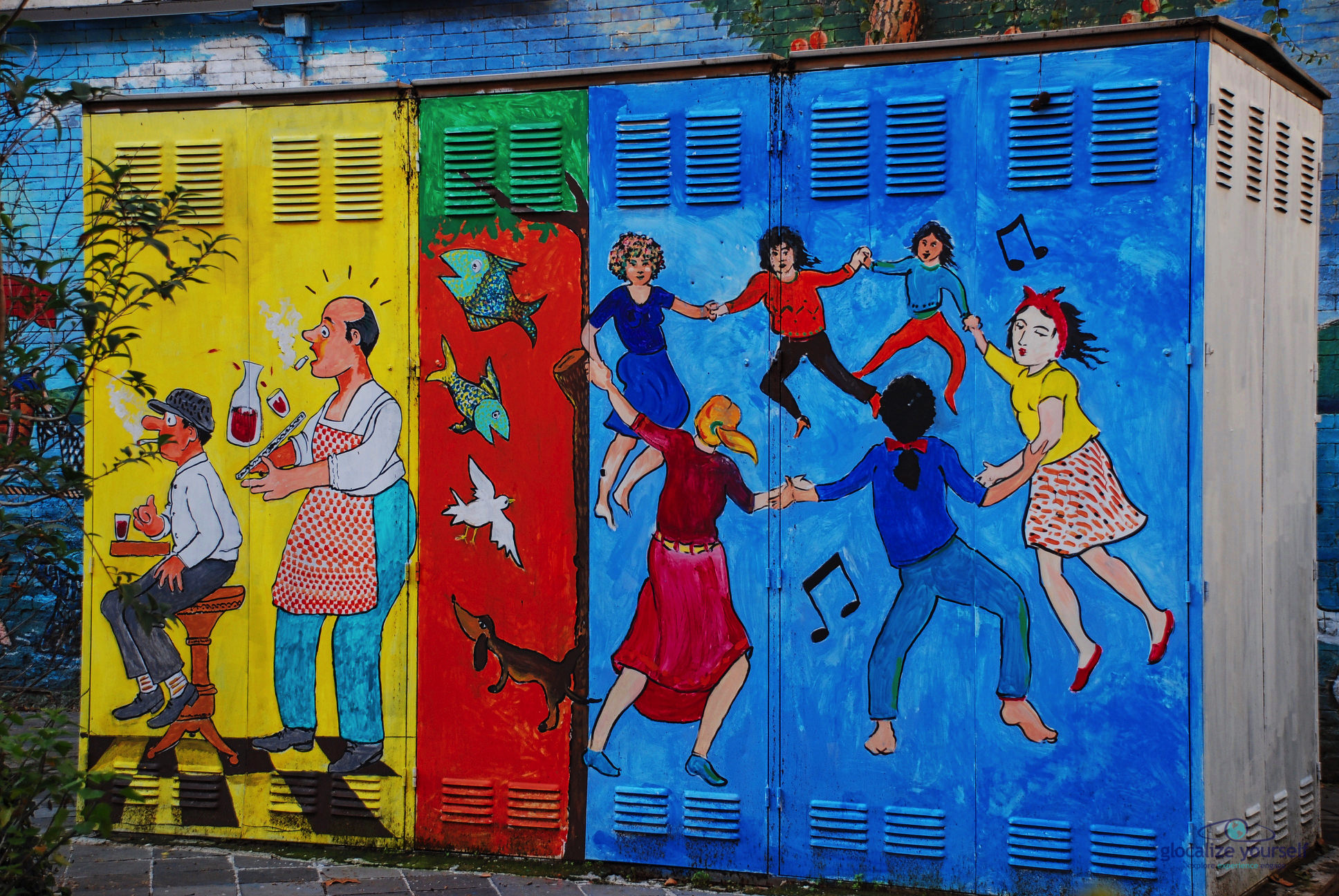 Via di Tor di Nona is a road that runs parallel to the homonymous Lungotevere, a little lower than the street level where cars speed, when they are not stuck in traffic jam. The fact of being partially hidden to most people would make almost anonymous this road, that, in the past was very renowned because there was the famous Apollo Theatre, where works of Bellini, Donizetti and Verdi were produced (formerly Theatre Tor di Nona, when it was founded on the behest of Queen Christina of Sweden in 1670). 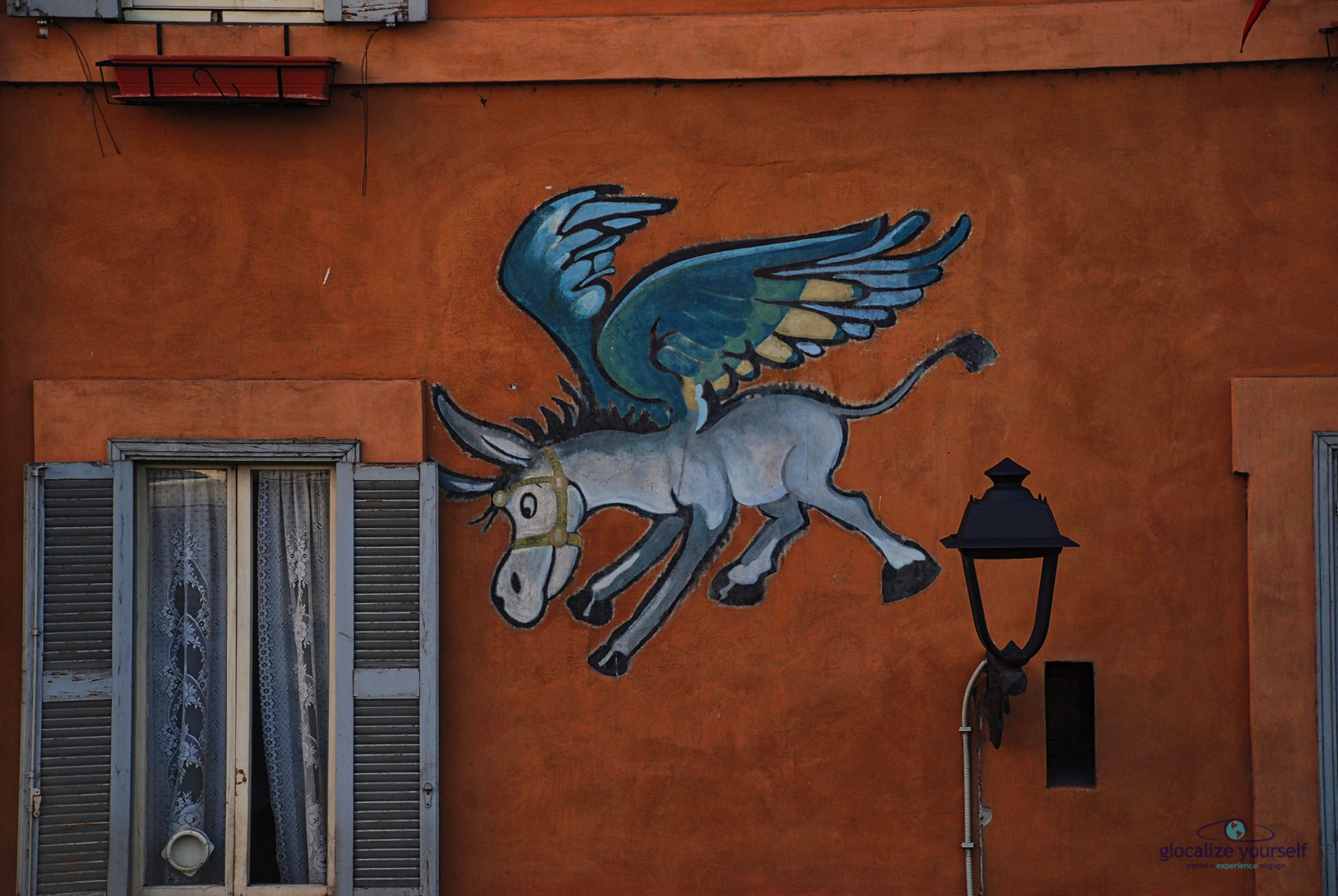 We were saying the road would be invisible to the many motorists, concentrated in the guide or committed to launching insults at drivers maneuvering too close or trying to break free from the bite of traffic, except that, looking towards one of the buildings that peek out from the little wall of the sidewalk running along the Lungotevere (on the right if you follow the direction of the road), you may notice a flying donkey. This donkey is painted on the front wall of an old building, with the head slightly downwards but with two large wings that lift him to the upper floors. But what is this donkey doing right there ? Well, to tell us how it got out of that building, you have to go back in time when in 1888 the magnificence of the Apollo Theatre were abruptly interrupted with its demolition, due to the works for the construction of the embankments of the river Tiber. In 1925, a memorial stone, still visible today, was laid in the spot where once stood the Theater. The loss of this great attraction meant that over time the area became increasingly forgotten causing a long and steady path towards degradation, until in the seventies of the twentieth century, the situation reached an unsustainable and unbearable level for the inhabitants of the road, which did not provide even the most basic services for a decent life and whose houses required deep maintenance and renovations. In 1976 the citizens rose up in protest to the City, which, until then, had remained deaf to the calls, and also gathered the support and sympathy of many young people between the 20 and 25 years of age including some students of the Faculty of Architecture. 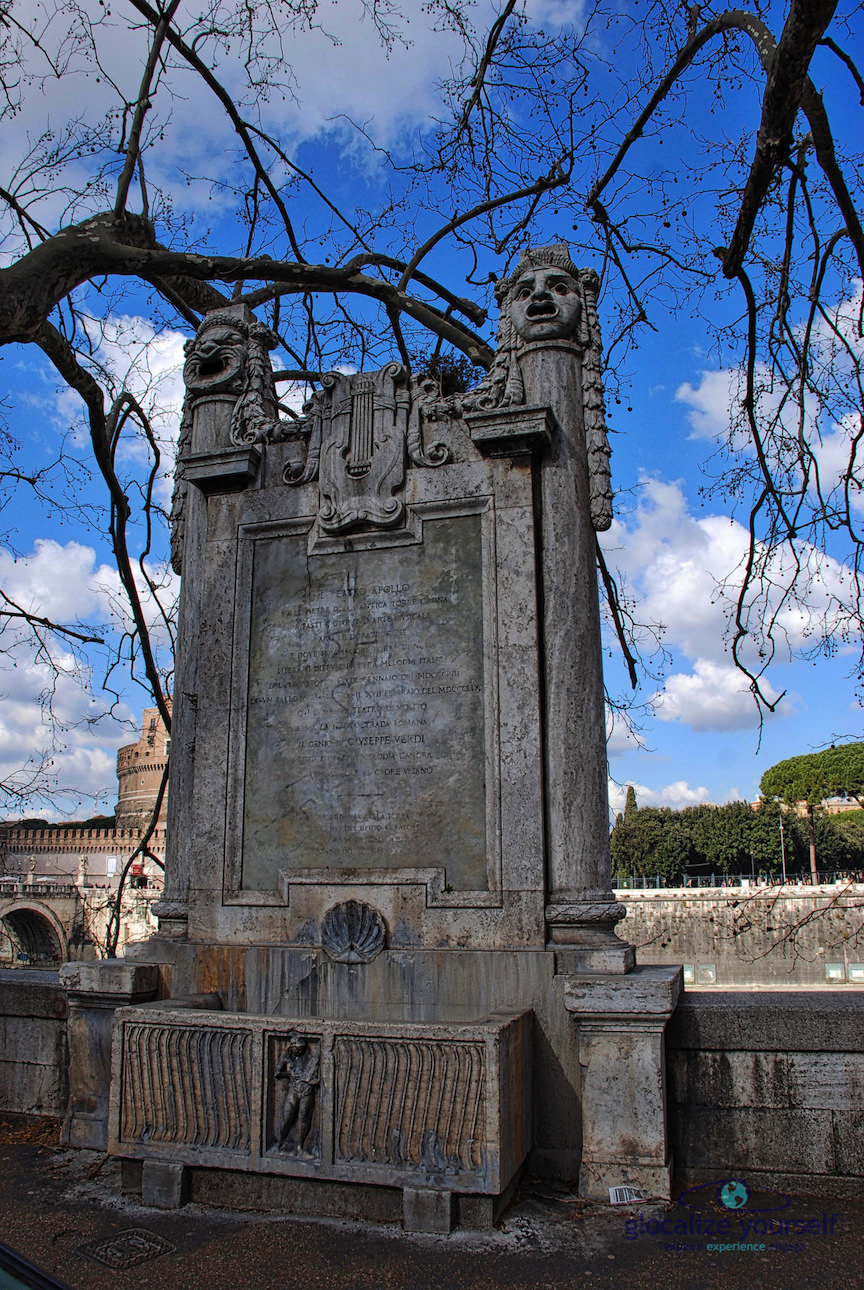 Together they decided to express their anger not in a violent way but becoming the first "writers" of Rome, by painting on the walls of their road “The Ideal World” to which they aspired, trying to represent it with scenes of real life together with fantastic characters, such as mermaids, animals and indeed a flying donkey. This was the Utopia, namely looking for a better reality though seemingly impossible to achieve. Among the various young people who then participated to paint the murals there was also Isabella Rossellini who painted her beloved dachshund dog. That event did not have the desired results immediately, the area was only recently recovered, and the paintings, with time, went wearing out and eventually disappeared. Remained only the flying donkey, as representative symbol of freedom and of the utopian dream. In December of 2013, the original "writers", along with their children, thanks to an authorization of the municipality, have repainted on a street wall a mural as similar as possible to the original of 1976. 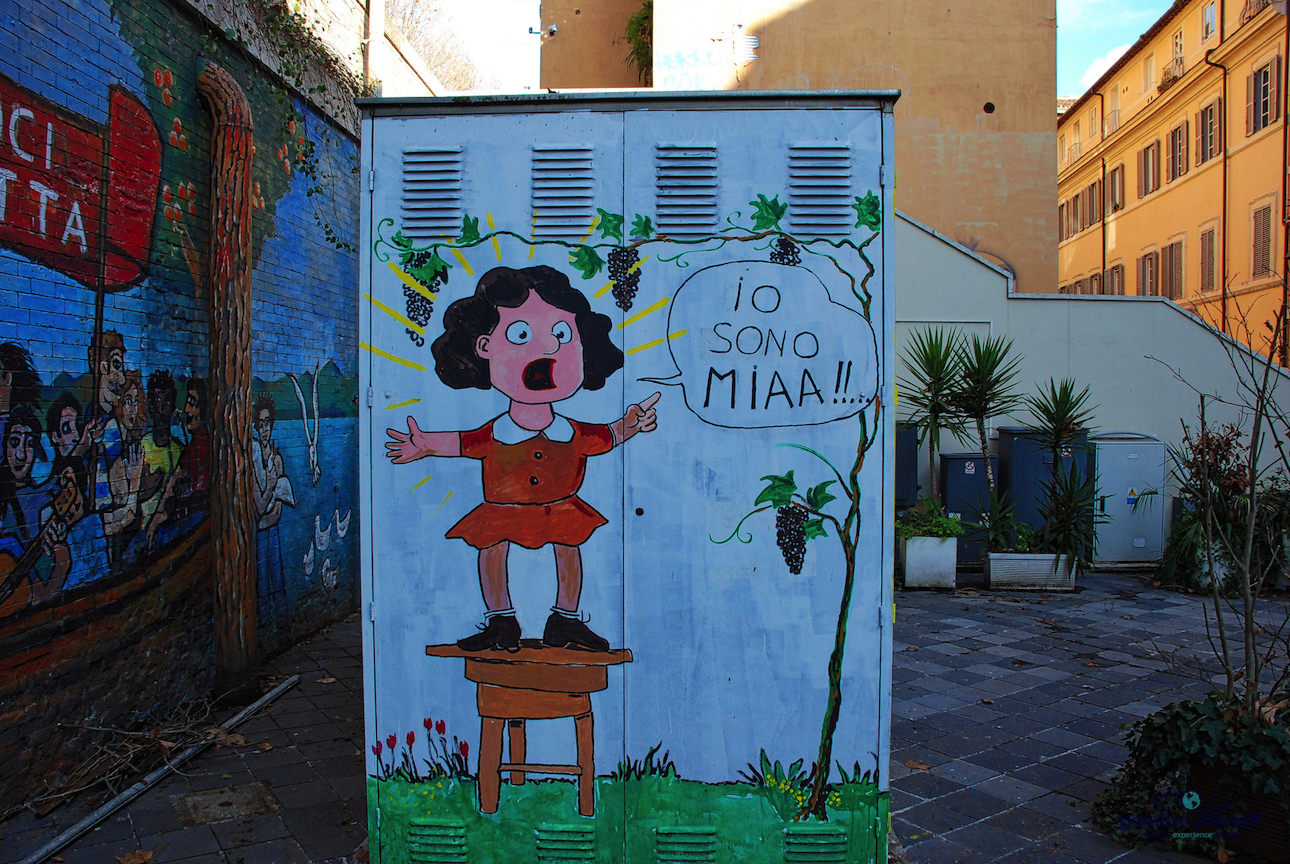 The street is now home to several popular spots, emerging fashion designers and art galleries. Passing over there and observing that winged little donkey it makes you ponder that it is true that donkeys fly in the skies of the naives or stupids, perhaps the same ones who believe in utopias or on the occurrence of wonderfully improbable things, but in Rome the "poetic miracles" like this can happen and then you foreigner, once back home, can tell that in front of your eyes there was a flying donkey. 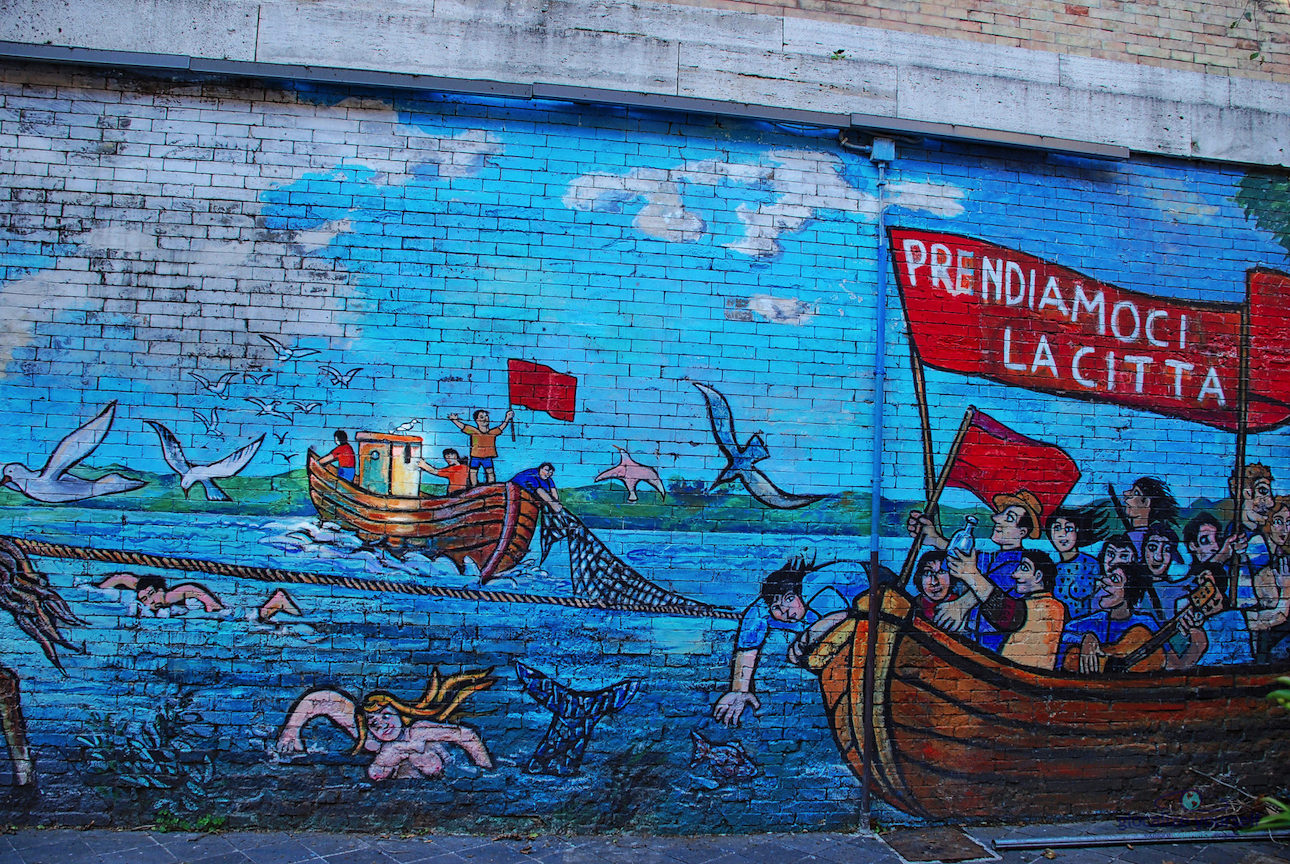